Theological, Anthropological
and Legal Approaches
The African Project in Missiology and Canon Law 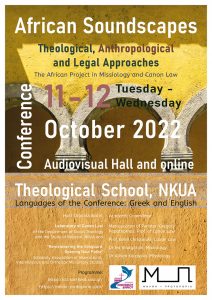 Languages of the Conference: Greek and English

Purpose and Rationale of the Conference

Africa is a continent so close to us and yet so far away. It is a vast continent, diverse and multifaceted. We have had historical ties with its northern and northeastern parts since ancient times, while its western, central and southern parts came into contact with the Christian world later. Orthodoxy has been present in the north since the first century AD, while a new, dynamic and promising relationship with sub-Saharan Africa and its indigenous peoples began in the 20th century. Orthodox communities are still forming in Africa and are today seeking their place in World Orthodoxy.
Despite Africa’s importance in our contemporary ecclesiastical history, and the continent’s ever-increasing significance in world history more broadly, Africa has not yet found its rightful place either in world historiography or in the field of theology.
The conference African Soundscapes: Theological, Anthropological and Legal Approaches constitutes a first concerted effort to approach Africa from the perspective of Orthodox theology, taking into account the dimensions of anthropology and law. It will be held at the School of Theology of the University of Athens, and is the first stage of a larger project called The African Project of Missiology and Canon Law. The conference will address at an initial level a series of fundamental issues concerning the presence of Orthodoxy in Africa from the central perspective of the theological disciplines of Missiology and Canon Law. It will also map the historical and social contexts in which the Orthodox Church exists, taking an interdisciplinary approach in synergy with other theological disciplines and other sciences, first and foremost with Social Anthropology. The experience of faith and witness, the historical experience of the entire Christian ecumene, as well as issues of identity and Africanization of Christianity are of relevance to our conference.
The theme of the conference will be developed in four sub-circles corresponding to four round table discussions. It is also hoped that the publication of a scientific volume will build on the issues under consideration in somewhat greater depth.

Live streaming on YouTube
on the Dean’s office channel:
https://www.youtube.com/channel/UCQ_cJ0q8u4VsNgHmeSswk-Q

Laboratory of Canon Law
of the Department of Social Theology
and the Study of Religion, NKUA and

The Programme of the Conference